My recent visit to the Arctic was both breathtaking and disturbing. It is a naturalist’s wonderland, offering many opportunities to appreciate and observe the eco diversity of the region. It is also a place where one can see firsthand the growing adverse impact of climate change and mankind upon its inhabitants.

Although it has long been debated as to what extent humans are contributing to climate change and our ability to adapt, what is undeniable is the fact that the earth is getting warmer. The current warming cycle is occurring twice as fast in the Arctic than anywhere else on earth, and it is causing significant changes in the extent, duration, and conditions of sea ice. The loss of sea ice around the Svalbard, an archipelago in the Norwegian Sea, is predicted by scientists to be particularly profound in the coming decades. 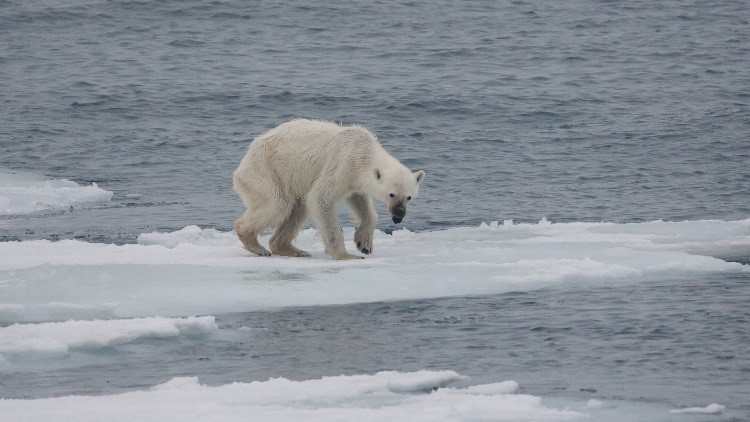 These changes affect all life forms in the Arctic but none more so than the iconic polar bear. An apex predator and the largest species of bear on our planet, the polar bear is very much a marine mammal in that it depends upon sea ice as the platform upon which to hunt and breed. This makes the polar bear the one species in the Arctic that is the most vulnerable to climate change because their land, and the crucial natural bounty it provides, is literally melting beneath their paws.

Unlike humans, the polar bear – and importantly, the food chain it tops – are unlikely to adapt. The U.S. Geological Survey projects that two-thirds of polar bears currently in existence will disappear by 2050 as a result of the melting sea ice.

Melting ice has an obvious external effect on the hunting patterns of polar bears. But polar bears are facing trouble from the inside as well. Unfortunately, due to their high-fat diet of seals and walrus they have become one of the most contaminated beings on Earth. This is because seals and walrus ingest fish and mollusks, which live on micro-organisms baring persistent organic pollutants (POPs). These man-made toxic substances are recognized carcinogens that never degrade and come from distant industrial factories via air and ocean currents.

While I believe everyone is responsible for climate change– from governments to oil and gas producers, to anyone who is dependent on fossil fuels to live their daily lives – there is a responsibility at the corporate level to curb behavior that exacerbates such negative externalities as climate change.

Just as the polar bear is at the height of its food chain, so are two of companies responsible for the creation and widespread use the pollutants contributing to the polar bear’s demise. 3M (MMM), with $33 billion in annual sales, is ranked No. 216 on Forbes’ 2019 list of the world’s largest public companies, and DuPont (DD) is ranked No. 81, with $86 billion in annual sales.

PFOS production in the United States ceased in 2002, and PFOA were phased out in 2015, the same year DuPont spun off a new company called Chemours (CC) with several of its chemical businesses.  However, PFOA are still widely used internationally and many imported goods, such as textiles and plastics, contain them.  The detrimental effects of these substances released into the environment are long lasting and have led to many lawsuits.

Last year, Minnesota won a $850 million settlement against 3M on the basis that 3M knew about the chemical dangers of these substances and continued to pollute natural resources. And this year, in Michigan, 200 families are suing 3M for contaminating the water. Chemours has sued DuPont, which had been facing 3,500 lawsuits in Ohio over exposure to PFOA, for underestimating the extent of its liabilities.

As a sustainable investment manager, it is my responsibility to enable investors to vote with their dollars and invest in the issues they care about. People can curb climate change and mitigate environmental pollution by voting with their money and investing in companies that have policies in place to limit such negative activities.

One key component of our sustainable investment analysis is whether a company engages in operations that either alienate community members or violate their human rights. So, it is interesting to note that while 3M might score well on some ESG factors, we consider it high risk when factoring in its intentionality.

PFOS and PFOA were replaced by 3M and other companies in the United States with different types of PFAS (per- and polyfluoroalkyl substances) that are said to breakdown faster and be safer overall; however, their relative safety is still being debated. We want to know to what extent did 3M know it was polluting the environment and how long has it continued to do so? These are areas of risk for the company that will affect its long-term financial performance, not only from a legal expense perspective, but from an investor and consumer sentiment perspective. We believe the growing interest in sustainable investing will increase the attention on these issues and as a result, create better corporate citizens that better serve their environment.

When we look at the polar bear, we are reminded that we have a responsibility to ourselves and to our children to do what we can to mitigate the effects of climate change and mankind on the environment. The polar bear’s role as the apex predator in the Arctic puts it at great risk to continue to accumulate toxic levels of man-made pollutants. They are the high Arctic region’s canary in the coal mine, and their growing attrition should be a wake-up call for us all.