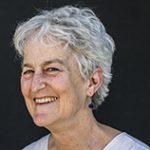 Sage interviews Professor Nancy Folbre about the evolution of care work in the U.S. Folbre is the Director of the Program on Gender and Care Work at the Political Economy Research Institute at the University of Massachusetts Amherst and a Senior Fellow of the Levy Economics Institute at Bard College.

You can find Folbre’s presentation here.

Sage Advisory: Hello, and welcome to the Sage Perspectives on the Future Conference 2019. We have the honor of being here with Professor Nancy Folbre. She is Professor Emerita of Economics at the University of Massachusetts Amherst and Director of the Program on Gender and Care Work at the Political Economy Research Institute. Welcome, professor.

Sage Advisory: We've just got a few questions about your presentation, which was well received by everyone in the audience. But for many of them, it was probably quite a new subject area. So perhaps you could start off by giving us an overview of what care work is, which was really the subject of your discussion today.

Professor Nancy Folbre: Care work is basically work that involves what it says, taking care of people. It’s work that often has a face to face, first name quality to it. It’s work that's often motivated by a sense of concern for the well-being of the person being cared for, and it's work whose quality is especially important to our living standards.

Sage Advisory: You mentioned in your presentation that there are a number of distinctive features of care provision and care work. Perhaps you could tell us some of those?

Professor Nancy Folbre: When economists talk about a market economy, they're generally talking about the supply and demand for commodities that are homogeneous. They're all alike. And so all you care about is the price. But care is never homogeneous. It's always very individual because it has this relational aspect where people are individuals, and they have individual needs and individual quirks. And a lot of care provision requires being very attentive to those differences, and often involves the development of a longer-term relationship. And that longer-term relationship can be very important to the quality of the service being provided. It's also very much a team endeavor. That is, it's not just one person caring for another; they're often kind of networks of care provision in which we're all embedded. So teachers rely on parents and doctors rely on their patients’ cooperation. And in a sense, you could see it as the consumer, the consumer of care, herself or himself is actually co-producing the output that's being produced. If they're not motivated, if they're not cooperating, if they're not engaged, the quality of the of the product itself goes down.

Sage Advisory: So for people listening to this podcast who are obviously a lot less well educated on the subject, how prevalent is care work in the United States? And how is the demographic split between men and women? Is it evenly divided?

Professor Nancy Folbre: No, not at all. But it's not easy to provide a precise quantitative measure because care work is kind of on a continuum. You know, everybody, I think engages in care work to some extent, but some more than others. And in general, women do more unpaid care work than men, especially as mothers, but also as caregivers for family members who are sick or disabled, or elderly. And also, women are very disproportionately concentrated in the sectors of the economy that provide services of health education and social assistance.

Sage Advisory: In terms of care work itself, what is different about it compared to other jobs that are in the market economy? What other differences are there that people might be unaware of?

Professor Nancy Folbre: Well, I think it's important to emphasize that it's generally paid less than other jobs. Workers in care work have less bargaining power as it were. Often their emotional commitment or their sense of moral obligation reduces their bargaining power. You know, there's a tune, there's a phrase from an old rock song called “Prisoner of Love.” “I'm just a prisoner of love.” A lot of love songs are about, you know, the difficulty of extricating yourself – “chains, chains, chains.” And, you know, there is that aspect, you get attached to people, and you get attached to family members. And if things get difficult, you don't threaten to leave unless you're paid more –you have a commitment. And likewise, you hear people who are, who are paid to care for people, for others, often saying, “you know, I just love them, I couldn't help it. I just love them. I could never leave them.” Or you know, “I could never, you know, I tried to do the best job I can because I really value them as people.” And I think that is, again, it's a continuum, and many people care about their jobs and care about the people they work with, but that aspect of emotional attachment I think is really salient in care work.

Sage Advisory: You've written many books over a number of years, so you have a perspective that is not just to moment in time today. So how have you seen things change over the last, you know, 10 or 20 years in terms of the appreciation for care work? And are people paying it more lip service today? Do you notice any changes there?

Professor Nancy Folbre: I’ve noticed really big changes [in care work]. And I think what's happening is it's becoming kind of a scarce resource. And when you can no longer take something for granted as being an infinite plentiful supply, you begin to appreciate it a little bit more. And you know, part of that is that more women have moved into paid employment, and so fewer hours overall are being devoted to housework and taking care of family members – even though working mothers actually put in almost as many hours in direct childcare as mothers who are not paid. And also, I think declining fertility, delayed marriage, the growth and the number of women who choose not to become mothers has made people realize that actually there may be some economic pressures at work that deserve consideration.

Professor Nancy Folbre: Well I think some of them are and some of them aren’t, and that's what's tricky about it, is that it's easy to make false promises. We all know that, not just with respect to care. And so I think it's pretty much a mixed bag. I mean, sometimes I do have to laugh at advertisements to the promise of customer care, because it's just kind of a preposterous claim. But on the other hand, I think there are a lot of businesses out there that recognize that their reputation for high quality is really valuable, and they're willing to invest in efforts to improve it, particularly if they're in competition with other firms who are promising the same.

Sage Advisory: And so competition will be a good thing in terms of this area, do you think?

Professor Nancy Folbre: I think it is. I mean, yes, in general, I think firms that have a lot of market power can really get away with lowering the quality of their product, not just increasing the price. And I think in fact, we all experienced that as consumers. I think we all feel a little bit captured by large firms that are providing services for which there's not a lot of competition.

Professor Nancy Folbre: I love the concept of the social climate, because I think there are these very strong parallels with a natural climate. And we've seen a growing awareness of climate change, a lot of effort to explain it, to understand it, to figure out what we could do about it. And I think we're sort of groping our way towards a better understanding of it and a more proactive response to it, although it is kind of alarming how slow this process is. But a social climate is similar. There's not some single measure like temperature or variation in temperature. But there are a lot of indications, like mental illness, or recently there's been a lot of research on so-called depths of despair, deaths from drug overdose, suicides. And I think these are indicators of something that's going on and in the larger society that we need to understand better because it's harmful. It's harmful to the community as well.

Sage Advisory: Professor, great presentation today. Thank you very much for your time.