China’s Conundrum: Why a Trade Deal Remains Out of Reach

It was the winter of despair, it was the spring of hope, we had everything before us, we had nothing before us. Charles Dickens’ timeless words in the opening of A Tale of Two Cities serves as a poignant reminder of the fear and greed that dictate the movement of financial markets. The trade war was all but resolved; now the deal is effectively off the table.

We think the bar is high for the U.S. and China to strike a deal on structural issues, such as changing China’s laws on forced technology transfer and the protection of U.S. intellectual property. China’s economic development objectives are fundamentally at odds with U.S. interests. Our base case is a prolonged negotiation period with any agreed-upon deals centered around correcting the U.S./China trade imbalance rather than the structural issues around each country’s economic system. In this scenario, we see a prolonged period of uncertainty in which risks of shocks to global growth (especially in Asia), investor sentiment, and asset prices remain squarely on the downside.

To process the current U.S./China trade battle requires a broader look at the larger structural issues that have created the underlying causes of tension.

China’s Economic Development is the Antithesis to U.S. Interests

China’s rapid ascent to the world’s largest economy is attributed to its role as the preeminent low-cost manufacturer. However, China is currently facing the problem of a “middle income trap,” a stage in economic development in which a country loses its competitive edge as purely an exporter, and concurrently, is unable to keep pace with developed countries in the production of value-added goods, such as high technology. Avoiding this outcome is nothing short of an existential issue for such a large, highly-indebted, populous nation.

To transition to a developed economy, China is undertaking a historic transformation: from a low-wage manufacturer dependent on external demand to a high productivity, high technology, value-added producer with increased dependence on its domestic economy. “Made in China 2025,” a state-led industrial policy introduced in 2015, addresses the methods by which China aims to make this transition. According to James McBride and Andrew Chatzky at the Council on Foreign Relations, China’s methods include setting explicit targets, providing direct subsidies, acquiring foreign tech companies, mobilizing state-backed companies, and forced technology transfer.

Therein lies the “structural issues” inherent in a trade agreement – China’s objectives are at the United States’ expense. The U.S. stands to lose its competitive edge as the epicenter of technology and value-added goods; while on the other hand, China cannot afford to deviate from its transition to a developed economy due to the looming middle-income trap.

On May 3, Reuters reported that China sent a diplomatic cable in which it “had deleted its commitments to change laws to resolve core complaints . . . theft of U.S. intellectual property and trade secrets; forced technology transfers; competition policy; access to financial services; and currency manipulation.” At the eleventh hour, China couldn’t commit to abandoning its best hope for an economic transformation.

The U.S. subsequently raised tariffs on $200 billion of Chinese goods to 25% at 12:01am on Friday, May 10. The tariffs are expected to have a material adverse effect on the Chinese economy – Citigroup economists expect the effect of incremental tariffs to result in a -0.5% reduction in Chinese GDP and removal of 2.1 million jobs in China over the medium-term.

Here is our outlook regarding trade for the coming months. Our base case is a prolonged negotiation period stretching into 2020, which should result in a period of higher uncertainty in markets balanced with continued policy support from global central banks. Less probable cases include a near-term trade agreement that could take place in two forms: a correction of the U.S./China trade imbalance with less focus on structural issues (more probable), or a trade deal in which China agrees to change its laws around competition and intellectual property (less probable). The risk of a no-deal is not zero, but we believe it is less likely as it is mutually destructive, and both countries could continue to “kick the can” of negotiations further and further into the future. The table outlining our outlook is below. 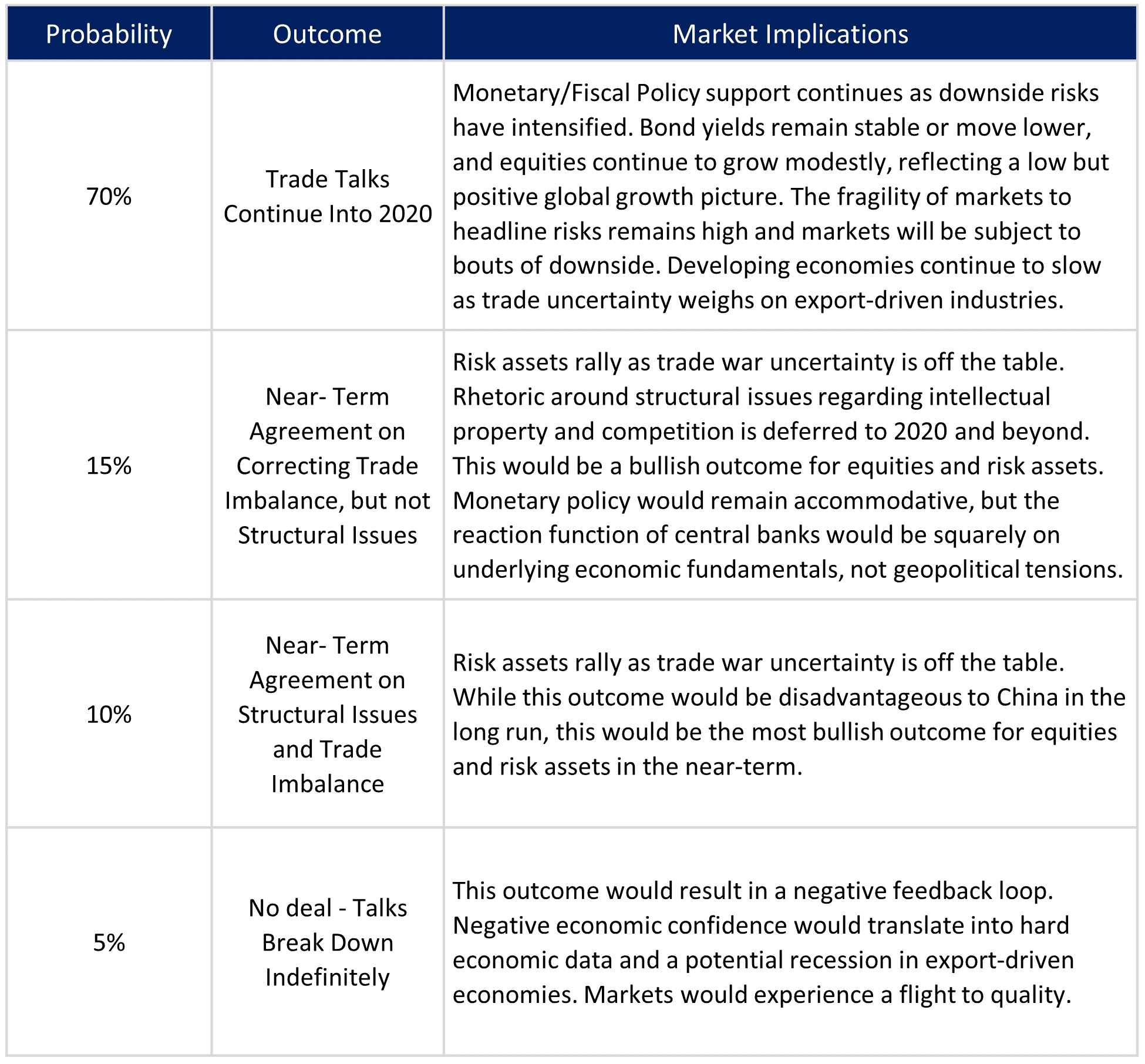